How to choose right baby crib
Want to Wean from Pumping? Here’s How!
The Best Nasal Aspirator Today
Cloth diapers

Tests have confirmed that you are going to have a new addition to your family soon. Now starts the guessing game of “is it a boy or a girl?”. Or first, you need to tell father about a new baby :). And then starts a game about baby gender. An answer expectant mothers are dying to find out, but not revealed until the first ultrasound. In countries where gender determination is legally banned, parents have no choice but to let it remain suspense until the due date. If you think there is no way you can control your eagerness and can’t wait to know your baby’s gender, there are old wives tales and other baby gender prediction techniques.

Wondering whether you’re having a boy or girl? Our Chinese Gender Predictor tries to determine your baby’s sex based on an ancient Chinese gender chart and the Chinese lunar calendar, using your age and when you got pregnant. Legend says the table is more than 700 years old and was discovered in a royal tomb.

There’s no scientific proof that the Chinese Gender Predictor works. But since there are only two choices — boy or girl — it has at least a 50-50 chance of making an accurate prediction!

Not every medical miracle was found in the 21st century. The Chinese gender calendar and calculator brings ancient information into the modern age. According to folklore, a Chinese Scientist supposedly discovered some data buried in a Royal tomb near Peking, China about 700 years ago which led to the creation of the Chinese Calendar for Gender and Baby Sex.

How does the Chinese Gender Chart Work?

Still curious to see what the Chinese Gender Predictor says is in the stars for your baby-to-be? Even if Eastern medicine and philosophies are entirely foreign to you, the easy-to-use Chinese Gender Chart might give the nod to whether you should start stocking up on pink or blue.

With the data plugged in, variables in a Lunar calendar are calculated behind the scenes in seconds, leading you to your answer. Will it be a baby girl swaddled in pink or baby boy bundled in blue? 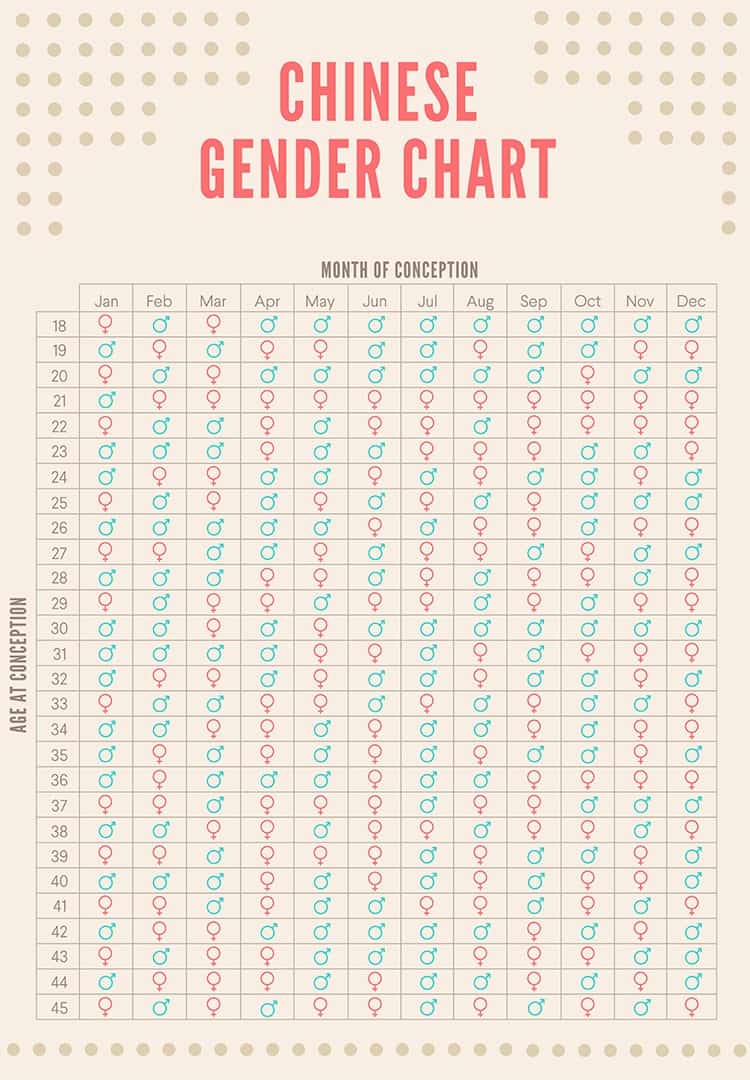 Those 50-50 odds not imbuing you with confidence? Here’s what other moms-to-be had to say about their luck with using the Chinese Gender Predictor during their pregnancies.

Bottom line, if gender accuracy is what you seek, check in with your doc. But to have a bit of fortune-telling type fun, check the Chinese Gender Chart.

Not pregnant but planning to?? This tool can be used if you are trying to conceive as well, especially if you are leaning towards a particular gender. Choose different conception dates and check the result to find if its a boy or a girl. Gender prediction for 2018 or 2017 can be done this way.